The Circle of Light Festival, Space, and Food Courts: The Sights of Moscow Discovered by the Tour Operators, Mass Media Representatives, and Bloggers from Latin America During Their Visit

At the end of September 2019, tour operators, mass media representatives and bloggers from Latin America paid a social visit to Moscow within the framework of a familiarisation tour, which was supported by Moscow City Tourism Committee. The guests from Latin America were offered a sightseeing tour and a special cultural programme to discover the capital from different perspectives. They also had several business meetings with the representatives of the tourism and hospitality industries of Moscow. 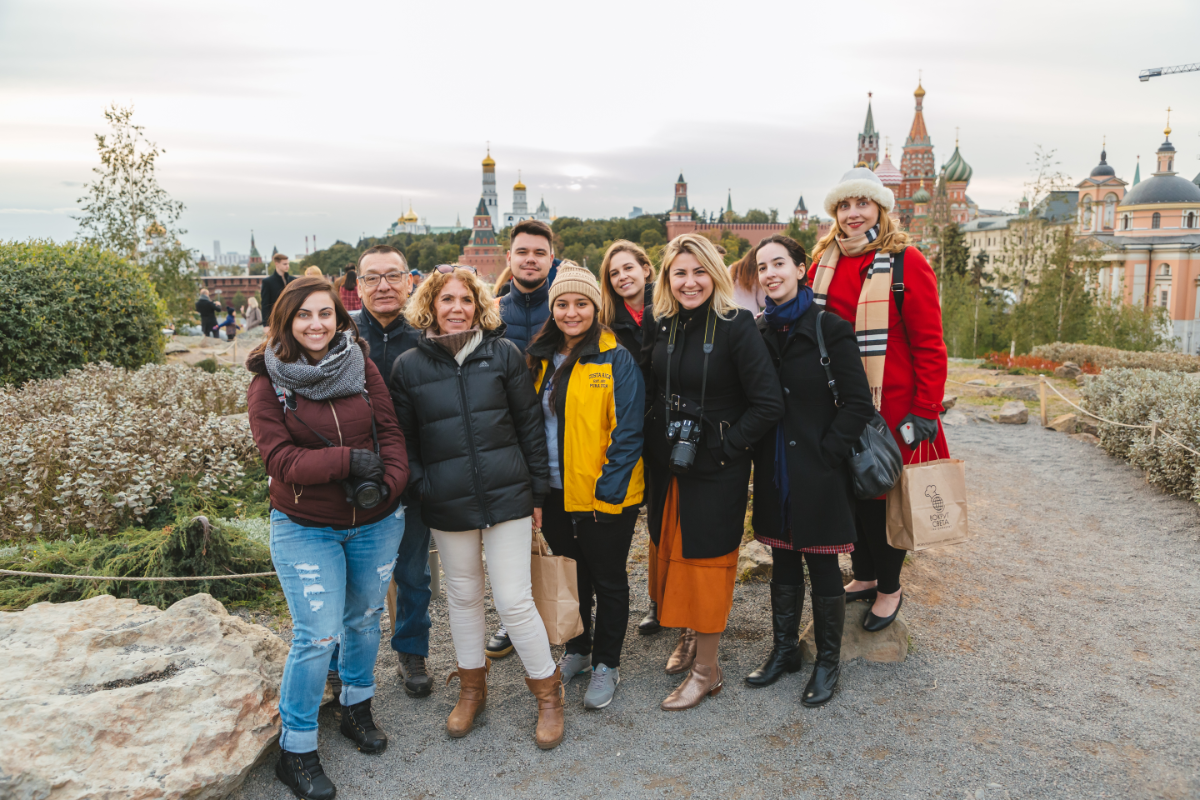 10 people
5 days
More than 20 sights
During their familiarisation tour, the representatives of tourism industry and mass media from Latin America visited major and globally famous sights of Moscow, such as the Kremlin, the Bolshoi Theatre, the Cathedral of Christ the Saviour, Gorky Park and the State Tretyakov Gallery, as well as some modern tourist attractions, including the Cosmonautics and Aviation Centre at VDNH and PANORAMA360, the highest observation deck in Europe. The guests also visited one of the most significant festivals of the capital – the Circle of Light, which is the Global Eventex Awards 2019 prize winner.

“Moscow was much of a surprise to me. In Brazil, we don’t know much about this city“, “The dull and gloomy place”, “It’s always snowing out there”, “The only tourist attraction is the Red Square”... These are only a few of the stereotypes that people believe in. During this tour, I faced a whole other Moscow. It’s a gorgeous city with lots of architectural sights representing different historical periods! I was especially impressed with Zaryadye Park and VDNH. Also, being a sports fan, I was excited to visit Luzhniki Stadium, where the World Cup Final had been held last year,’ says Paulo Mancha, the journalist of Viajar pelo Mundo, top travel magazine in Brazil.

Guests from Latin America were further able to enjoy gastronomic Moscow, represented by national cuisines from all over the world. They also took part in a cooking class and learned to cook traditional Russian dishes, such as blini and pelmeni.

‘This tour was very informative. It let us discover modern bright and vibrant Moscow, which goes well beyond its spectacular historic centre. I’ve been here before, 4 years ago, and I can claim that since then Moscow has changed a lot. It was an amazing tour!’ Brazilian travel blogger Lala Rebelo reports her impressions.

Besides, the familiarisation tour included the business meeting, organised for the tour operators from Latin America and Moscow to mutually increase the tourist flow of the two regions.

‘Travel experience usually consists of personal impressions, and this is not solely our philosophy, but also a global trend. During the trip, I have come to find that the capital of Russia is a beautiful and safe city with friendly and smiley residents. It was an unforgettable tour!’ shares his impressions Gabriel Figueroa, the representative of Alive Travel company, the major travel agency in Latin America.

This familiarisation tour was organised to develop a partnership in the tourism industry, as well as to promote Moscow as a travel destination in the Latin America travel services market.