Thousands of Guests, Hundreds of Business Meetings, Dozens of Moscow Attractions: The Course of Events at ITB Asia

Moscow successfully presented its potential for tourism at ITB Asia, an international tourism exhibition, which was running in Singapore in October 16–18. The exhibition stand designed by the Moscow City Tourism Committee became a platform for presentation of more than 30 projects and attractions of the Russian capital. Representatives of the city held over 350 meetings. 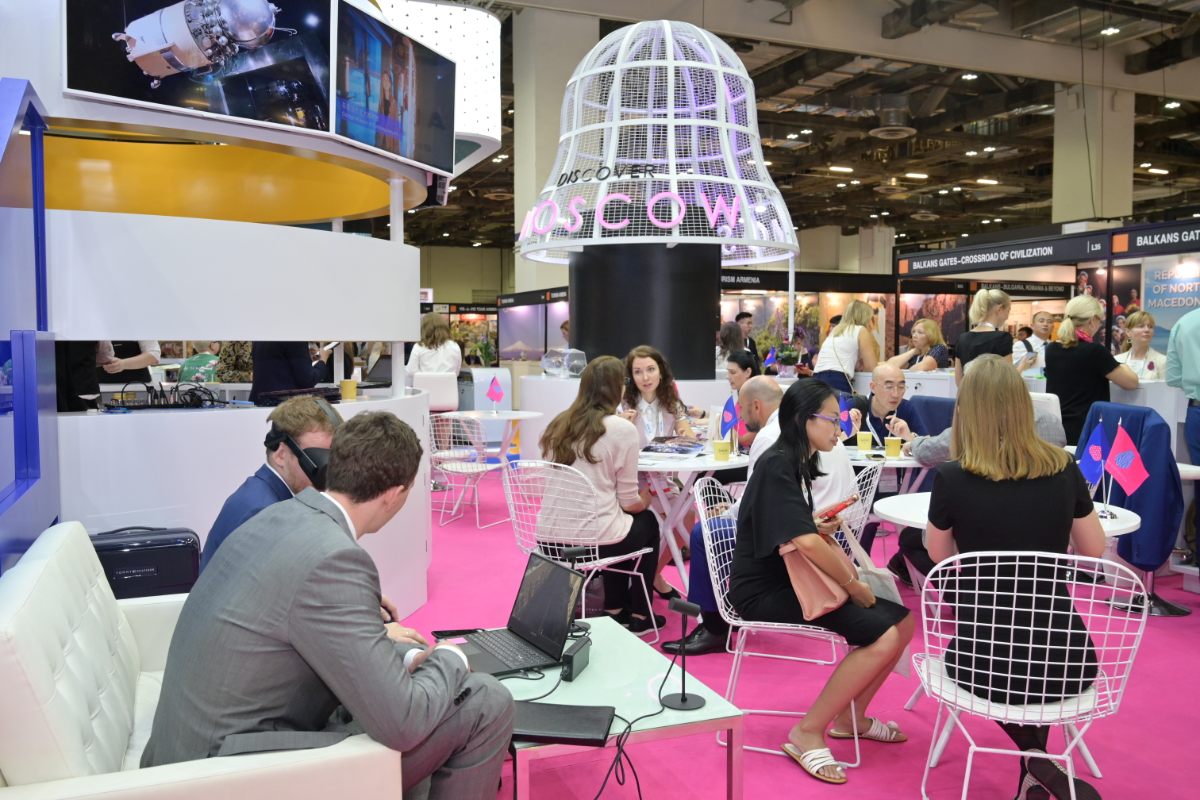 Natalya Suvorova, Deputy Chairman of the Moscow City Tourism Committee, was delegated to the event as a representative of the Moscow government. She held a series of interviews and official meetings, in particular with Andrey Tatarinov, Ambassador Extraordinary and Plenipotentiary of the Russian Federation to the Republic of Singapore. Besides, the office of the Singapore Tourism Board provided its space for a meeting with Gan Hui Yu, Head of Business Innovations and Digital Transformation Division of the organization. Among other things, the parties exchanged their experience in development of tourist infrastructure and expressed their mutual readiness for further cooperation.

During the official visit to the exhibition stand of Moscow, the executives of the Singapore Tourism Board appreciated its visual concept design, fresh and exciting. They noted that it effectively communicated one of the main ideas embodied into the architecture of the stand: to present Moscow in mixture of history, traditions, and the modern city life.

Several times a day, there was run a video presentation of the potential of the megapolis for tourism, its modern architecture, the main attractions, and the major event projects. Among them were a series of Festivals named “Moscow Seasons”, the highest observation deck in Europe PANORAMA360, Moskvarium, and many other events and sites.

Also, visitors of the stand were offered with an interactive entertainment program. The guests were provided with an opportunity to take an air tour above the Moscow having put on a special VR headset or to see 3D objects of Moskva City in augmented reality having pointed the camera of a mobile device to an AR marker on the floor. In addition, as part of a partnership promotional event, the stand of Moscow each day provided place for tasting sessions arranged specially for the exhibition in Singapore.

“It was the first time that we participated in ITB Asia. We appreciated its format very much, including the opportunity to appoint meetings with buyers in advance. This helped us to conduct more than 40 successful business meetings. The stand of Moscow was looking glamorous compared to other locations, so, it attracted more visitors. We managed to communicate with representatives of those countries that, being distant, didn’t visit European exhibitions. Now we are waiting for a flow of new orders in a short time,” shared Dau Naaman, CEO of a transportation company OOO MB-Prestizh.

“Presence on the stand of Moscow at ITB Asia gave us an opportunity to look at this market at its potential from inside, to get in touch with prospective partners, and to decide in which direction we shall develop. Everything was organized professionally and seamlessly. For us, the meetings and our participation here were very useful. To sum up, it's worth to note that there is certain interest to our city, therefore, the joint work and development shall be continued. We hope there will be many successful joint projects!” noted Inna Asaturova, head of a foreign project of TSUM department store.

In Singapore, Moscow presented a broad program with official and business meetings and took part in a panel discussion under the title “Unconventional Thinking: Winning the Hearts of MICE Buyers”. In the course of this panel, experts discussed types of thinking and practices characteristic of a successful MICE business. Among the participants was Ksenia Boykova, Deputy director for international relations and event management of ANO Moscow Project Office for Tourism and Hospitality Development for international cooperation, conference, and exhibition activities.

“Summarizing the results of the event in Singapore, it's worth mentioning a high quality of the audience and of those participants whom we happened to get in touch with. Those meetings that were appointed in advance turned to be advantageous and prospective not only from the point of view of accommodating future tourist groups, but in the context of the business tourism as well. We were able to see this trend – a growth of travel flows from Asia timed to business events. Russia is interesting to them, but Moscow is of primary interest as the main platform for MICE tourism in Russia,” said Olga Tkacheva, Deputy CEO for strategic development and marketing of Flotilla “Radisson Royal”.

“I would like to express my gratitude to the Moscow City Tourism Committee, which organized this event. This was our first experience of joint participation. The work at the exhibition was really done on a very high level: all issues with inviting guests and organizing meetings were solved. We really felt that for the first time in a decade we obtained a huge impulse for work and development of our business. Besides, the presentations of the exhibits on the stand of Moscow were very interesting. We are still impressed,” noted Natalia Ivantsova, Head of the Commercial Sales Department of Izmailovo Tourist Hotel Complexes.

On October 15, during the presentation of the Moscow’s potential for tourism at ITB Asia in Singapore, the Moscow City Tourism Committee together with #TheLastGame project and Vyacheslav Fetisov, the first ambassador of Moscow, organized an ice hockey game. This game participated in by hockey players from several countries was aimed at drawing the public attention to the global environmental issues.

Until the end of 2019, Moscow will take part in two more exhibitions: World Travel Market (WTM) in London and IBTM World in Barcelona.   In 2019, Moscow participates in the largest tourism forums around the world. The first event where Moscow presented its potential for tourism was World Travel Market (WTM) Latin America held in April. The exhibition stand of Moscow attracted more than 5 thousand experts from the Latin American tourism industry. The participants from Moscow held over 640 working meetings. At Arabian Travel Market (ATM), the largest tourism exhibition in the Near East, which was run in Dubai from April 28 to May 1, Moscow presented over 30 projects. Its stand was visited by more than 8.5 thousand tourism industry professionals, while the participants held over 980 formal and business meetings.

In June, the Moscow’s stand won several awards for its presentations at international events in East Asia. At Seoul International Tourism Industry Fair (SITIF) in Seoul, it was awarded for the best design. At Beijing International Tourism Expo (BITE), it gained the Best Creative Award. And at International Travel Expo (ITE) in Hong Kong, the exhibition stand of Moscow took the Audience Choice Award.

ITB Asia is one of the largest international tourism exhibitions in Asia Pacific. In 2019, there were over 1300 participants from 132 countries of the world. During three days of work, the event was visited by more than 13 thousand people. Its main target audience are representatives of tour operators, hotel business, airlines, and tourism organizations.
VIEW
VIEW
VIEW
VIEW
VIEW
VIEW